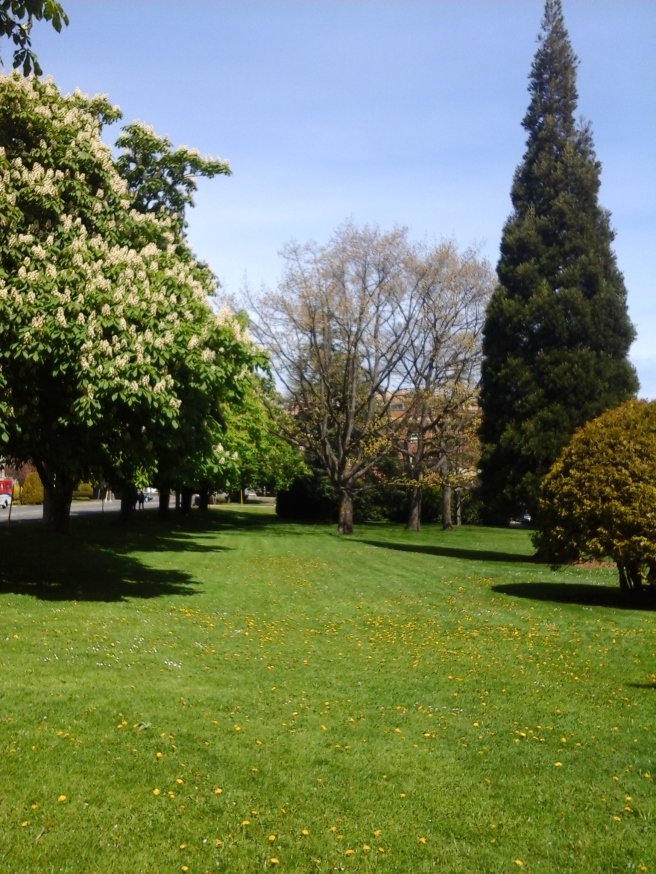 The Royal Jubilee Hospital Green Space or the Begbie Green is in the seaside city of Victoria, one of thirteen communities that form the Capital Regional District of British Columbia. Built in eighteen eighty nine, the Royal Jubilee Hospital has a several terrific places to explore nature and the outdoors. The landscaping of the grounds has created isolated and discrete open spaces that are connect by a maze of paved walkways and sidewalks. As you are likely to get lost exploring the outdoor spaces at the RJH make sure you have time. The campus for RJH is located between the Municipality of Saanich and the City of Victoria and only the green spaces found within Victoria are shared here.
The main green space is the large urban grassland called Begbie Green. Begbie Green, near the corner of Richmond Road and Foul Bay Road, is a grass covered area shaded with mature deciduous and evergreen trees. There are benches to rest at along the sidewalks that parallel the roads, although most of them are for the bus stops. Lovely London Plane, pine, Garry oak and chestnut trees are found in this area. A tall cedar hedge and smaller rose-hip hedge separate the area from Begbie Hall and the parking lot. Walking along the Richmond road sidewalk takes you past Begbie Hall, the former dormitory for students studying to become nurses now used for administrative offices. Begbie Hall, built in the nineteen thirties, is bounded by some lovely shrubs and hedges. Continuing along to the staff parking entrance to Coronation Street are a couple of islands of grass with some tall trees. If you look up you can get a glimpse of a roof top garden, one of several private outdoor spaces available only to hospital personnel. Back on the ground there are picnic tables and benches located just north of Coronation Street. The large staff parking lot north of Fort Street has some patches of Garry oak trees with minimal grassy meadows.

The hospital and hence green space take its name from the eighteen eighty seven Royal Jubilee of Queen Victoria. Begbie Green takes it name from the Begbie Hall of the hospital. Sir Matthew Baille Begbie was the first Chief Justice of the Crown Colony and judge who was also an adventurer who traveled thorough British Columbia learning the local language and hearing court cases. Its possible the Hall was named in his honor.

Jubilee Hospital Green Space can be reached from the Trans Canada Highway. Follow the highway as it becomes Douglas Street. Turn east onto Bay Street and continue past to Richmond Road. There is a large paid parking area directly across Richmond Road. The green space extends south along Richmond Road to Fort Street, which has some roadside parking. Buses travel along Fort Street and Richmond Road and there are bicycle racks, lockers and compounds available.