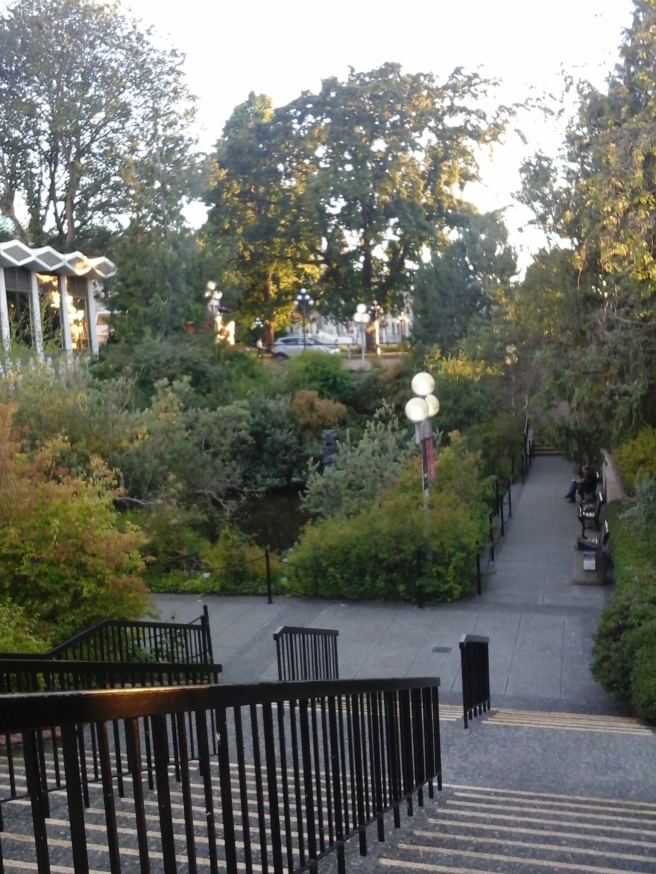 The Royal British Columbia Museum Sunken Garden is in the seaside city of Victoria, one of thirteen communities that form the Capital Regional District of British Columbia. The sunken garden below the Royal British Columbia Museum is a great place to explore a unique area in the City of Victoria, B.C. Particularly since this garden, developed in nineteen sixty eight, could disappear under the foot print with the improvements of the museum building and grounds. The opportunity to explore nature and the outdoors in your backyard of downtown Victoria, B.C., is changing. Accessible from stairs on either side of the garden, a shallow pond and native plant garden, recessed below the roads on the corner of Government and Belleville streets, are like a secret refuge. In the Native Plant Garden of the Royal BC Museum, wild lilacs grow near the stairs that descend to the lower plaza. The Garry oak and shore pine trees are seen among several other native plants such as saskatoons, Oregon grape, red alder and another estimated three hundred other species. The sunken garden contains a pond with “Spirit” an abstract sculpture by Elza Meyhew which can be viewed from one of the benches along the concrete walkway. From the garden, there is an interesting view of the base and plaque for the carillon or singing tower. Constructed for the centennial and used since nineteen sixty eight, as well, the Netherlands Centennial Carillon houses sixty three bells that ring periodically throughout the day. The bells are rung using a clavier, a keyboard of sorts, that is connected by a wire to each clapper. This singing tower is about twenty seven meters tall and is considered a musical instrument that is played by a carillonneur. Also on the grounds of RBCM is a cascading water fountain and a time capsule sealed in nineteen seventy-one. See if you can find them too. There are other places to explore near the sunken garden. Thunderbird Park, Elliot Square, Empress Hotel Garden, Parliament Building Gardens, Harbour Walkway, Cridge Park, St Ann’s Academy Gardens and Beacon Hill Park are nearby.