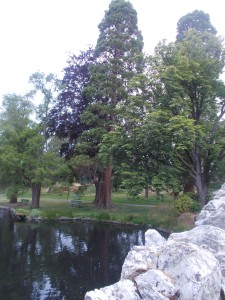 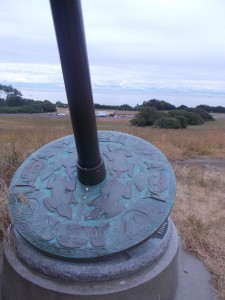 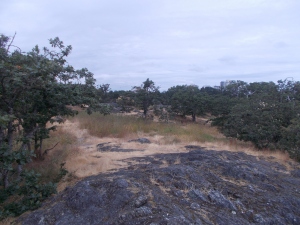 Beacon Hill Park is in the seaside city of Victoria, one of thirteen communities that form the Capital Regional District of British Columbia. Beacon Hill Park is on the southern end of Vancouver Island. About two blocks from the Inner Harbour in downtown Victoria, B.C., is Beacon Hill Park with Garry oak meadows, Douglas fir woods and groves of deciduous trees including black cottonwood trees. Originally seventy three hectares, the park was landscaped into an arboretum with flower and rhododendron gardens, sports and play areas in the early eighteen hundreds. It is a wonderful place to explore nature and the outdoors. Enjoy the manicured gardens, woods and lakes that encompass the current fifty-five hectares, as about eighteen hectares provide paved parking areas, roads and footpaths, notably Douglas Street, Dallas Road, Southgate Street and internal roadways. Beacon Hill Park has a several kilometers of paved trails and woodchip covered footpaths to hike, walk and explore. The Royal Victoria Marathon, TC 10K and local elementary, middle and high schools use the roadways and trails in Beacon Hill Park for foot races throughout the year. Other runners, dog walkers and hikers are here for daily excursions.

Goodacre, Fountain and Ross lakes with their connecting streams host many resident and migratory birds, frogs and turtles. Squirrels, raccoons and rats are also seen in this park as well as numerous humans and their dogs. Great blue herons nest in the taller Douglas fir trees as do barred owls, ravens and eagles, to name a few. The clamshell outdoor pavilion, built in nineteen forty eight, hosts the occasional band concert and summer movie nights. As one may guess, dogs are permitted in this parkland yet must be on leash in the main park area.

One of two playgrounds in Beacon Hill Park is east of Arbutus Way. This play set has two sections. The toddler set has lower slides from tower platforms that are reached by stairs and ladders. The larger kid set has more climbing apparatus and platforms with towers and slightly higher slides. This playground is frequently very very busy. The toilets are to the south of the playground as the small building to the east is an old storage shed. The Beacon Hill Petting Zoo, along Circle Drive, and another children’s play area, with a huge watering can are both worth a visit. The Watering Garden sprinkles water over the area that once hosted a small wading pool. It is closer to Douglas Street along Circle Drive and is excellent when the weather is warm.

Beacon Hill Loop roadway leads up to the Mount Beacon summit at 79 meters. The view across the Salish Sea’s Strait of Juan de Fuca and the Olympic Mountains of Washington State, U.S.A., is worth the excursion. A pavilion, which houses a couple of large checker boards, is near the summit. At present it is boarded up and surrounded by pine trees and other shrubs making it inaccessible. A large Canadian flag pole stands near the pavilion and may mark the location of original pair of navigational markers. These paired markers were use by mariners to triangulate the location of Brotchie Ledge, presently marked by a green and white marker. Brotchie Ledge is a shallow reef which was re-named to honor Captain William Brotchie who crashed his barque Albion on the reef in the late eighteen hundreds.

Take some extra time to have a picnic, play baseball, soccer or tennis as the lawns for the sports fields are tended year round. There is a small putting green for inspired golfers near the giant sequoia tree located at the junction of Circle Drive and Chestnut Row. If you have a membership to the private clubs and their buildings and more time, benefit from a session of cricket, courtesy of the Victoria and District Cricket Club-Oak Bay, or lawn bowling, at Victoria Lawn Bowling Club. Both clubs have been part of Beacon Hill Park landscape since inception.

Tree species from around the world thrive in Victoria, B.C., and some two hundred species have been introduced in plantings. This is in addition to the hundreds of rhododendrons. The alpine, aquatic, sundial and rose gardens contain many more exotic and native plantings. The Mayor’s Grove, in Heywood Meadow near the baseball diamond, extends along the east side of Arbutus Way from Southgate Street. Enjoy the oak, big leaf maple and hawthorn trees planted by notable dignitaries. There is an information board showing the location of the trees as well as numbers and notations on the plaques near each tree in the grove.

Beacon Hill Park hosts London plane, horse chestnut, Yoshino cherries along its Heywood Avenue border. Cedar trees in the park include red, white, blue atlas and deodar species. There are giant sequoias, redwoods, mountain ash, beech, holly, dogwood and eucalyptus trees. Since most of the introduced trees were planted around eighteen eighty-eight when the parkland was designed by architect John Blair and horiculturist George Fraser, many of the trees in this park are well over a hundred years. 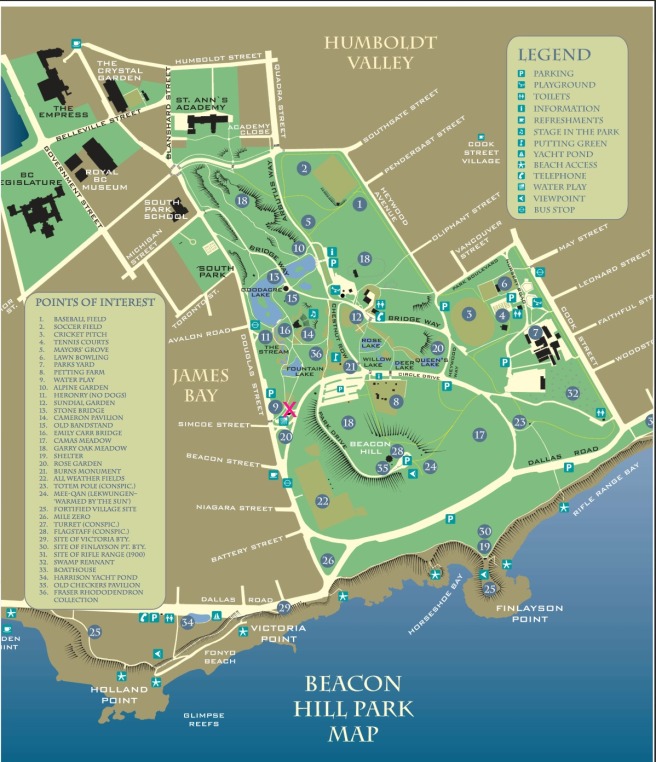 Beacon Hill Park can be reached from Blanchard Street. Stay on Blanchard Street as it merges with Douglas Street near Southgate and Superior streets. This marks the western corner of the parkland. Beacon Hill Park is also bordered by Heywood Avenue, Park Boulevard, Cook Street and Dallas Road. There is roadside parking along these streets. City buses travel to the park from downtown Victoria.

There are many books and online resources with information about Beacon Hill Park such as Chaster et al.’s 1988 “Trees of Greater Victoria: A Heritage”, a BC government name information http://apps.gov.bc.ca/pub/bcgnws/names/12530.html and the History of Beacon Hill Park http://www.beaconhillparkhistory.org/index.htm