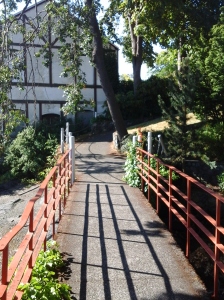 Laurel Point Park is in the seaside city of Victoria, one of thirteen communities that form the Capital Regional District of British Columbia. Watch float planes, harbour and international ferries, power and sailing yachts navigate the sea as you stroll along the southern shore of the Inner Harbour of Victoria, B.C., in Laurel Point Park. There are two walkways through this park. One is a shoreline path. It is about four hundred meter long. This concrete footpath follows the shore line and provides amazing views of water as well as the condominiums along the north shore. The Delta Coast Hotel and Johnson Street bridge are seen along the north shore pedestrian path called the Westsong Walkway. Laurel Point is a rocky shallow projection which narrows the channel into the Inner Harbour area of Victoria’s Harbour. At night there is a quick flashing red light that marks the shoal for marine traffic. Like much of the shoreline around James Bay the parkland was created by filling in the seabed. The second concrete pathway has a slightly higher elevation and is closer to the hotel. It is a slight short route at about three hundred meters. At just over half a hectare in size, Laurel Point Park has grass areas for relaxing as well as many benches. There are several landscaped flower beds as well as Garry oak, arbutus and other trees.  Laurel Point Park abuts Centennial Park to the east and its pathways form part of the David Foster Way, a pedestrian pathway along the east and south shores of Victoria’s harbour from Barclay Point to Ogden Point.

Laurel Point Park can be reached from the Trans Canada Highway. Continue along the highway as it becomes Douglas Street. Turn left onto Saanich Road then right onto Blanchard Street. This route avoids the one way section of Douglas Street in the downtown area. Follow Blanchard Street to through downtown as it eventually curves to become Belleville Street. Continue along Belleville Street and follow to past the US Ferry Terminal. The park entrance is near the junction of Pendray Street and Belleville Street. Through Centennial Park. Alternatively access the park from the foot of Cross Street or Montreal Street. There is limited roadside parking in these areas of downtown Victoria, B.C.