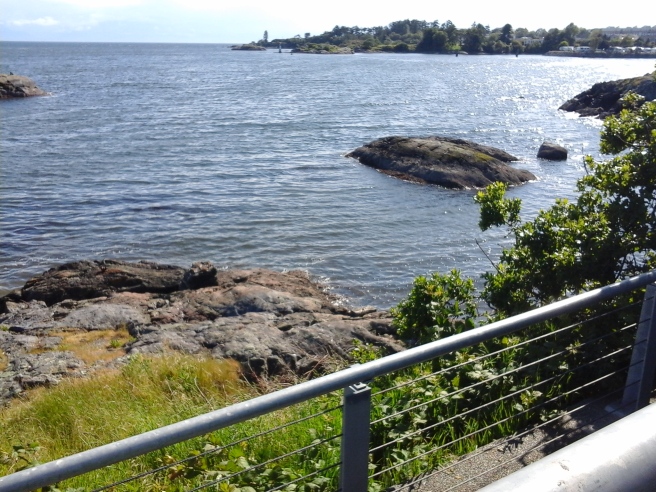 Rainbow Park is in the seaside community of Victoria, one of thirteen communities that form the Capital Regional District of British Columbia. Named after the HMCS Rainbow, the first Canadian Navy ship, Rainbow Park is a popular yet peaceful park on Victoria’s Middle Harbour. This quarter of a hectare neighborhood park has nice grassy area for toss a ball or Frisbee. A couple of large shore pine trees provide morning shade to a small area of the park while a small grove of large arbutus trees are visible from the parking area off Russell Street. There is a curious double terraced series of benches along part of the waterfront which can accommodate a large group of people. The terraced area has hand rails. As a Victoria West community park there are also picnic tables to enjoy the view across the harbour to Odgen Point, Berens Island, Work Point and further across the Strait of Juan de Fuca to the Olympic Mountains of Washington State, USA. A uniquely placed picnic table is in a small grassy covered point on the shore, similar to the one seen in North Saanich’s Cy Hampton Park. A concrete pillar, on the foreshore, was part of the foundation of the nineteen thirty eight rowing club for the James Bay Athletic Association. Rainbow Park is along the trail that forms Westsong Way Walkway and is nestled between Robert and Russell Street Green Spaces. By the way, another Rainbow Park in Saanich, with a playground, lies on the south side of McKenzie Avenue near Rainbow Street and can be reached by following the Galloping Goose trail toward Swan Lake then circle part way around the lake to Rainbow Street.

Rainbow Park can be reached from the Trans Canada Highway. Continue along the highway as it becomes Douglas Street. Turn west onto Johnson Street and continue across the bridge where the road becomes Esquimalt Road. Turn left onto Robert Street, which is about six streets past the bridge. There is small parking area near the end of the street. A city bus travels along Esquimalt Road from downtown.